Just recently, my partner Tony Belton and I have begun to formulate our own reviews of live performances that we have attended. This one was written by me (as indicated by my prose style) but represents our joint response.

REVIEW BY PENNY CORFIELD and TONY BELTON
Call Mr Robeson: A Life – with Songs (2012)
Written and performed by: Tayo Aluko
at the Warehouse Theatre, Croydon: 18 May 2012 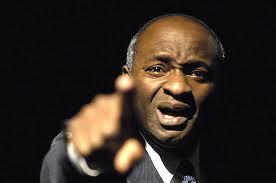 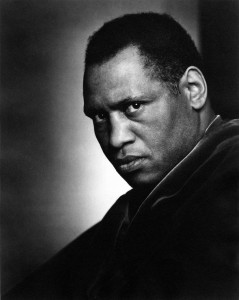 The magnificent power of words – and, especially, of words set to music in song – laid the basis for this mesmerising performance by Tayo Aluko. He deployed his deep baritone and his acting charisma to take the audience through a summary of the life of the great American singer Paul Robeson (1898-1976). True, the audience was predisposed to be appreciative. Yet it would take a veritable heart of stone not to be moved by ‘Ole Man River’, ‘Steal Away’, and ‘Going Home’, sonorously performed close at hand, in the intimate surroundings of Croydon’s threatened Warehouse Theatre.

Tayo Aluko as a young man in Nigeria had never heard of Robeson. Once having got the message, however, he determined that others should share his excitement. Hence his dedication in writing and performing the script as a one-man show. Incidentally, some people in the Croydon audience ventured that Robeson was less likely to have been forgotten in Britain than in his native America. Here he was feted for his music and his internationalism. But, either way, there is scope for all to learn more about this remarkable singer and activist.

Sensitive piano accompaniment came from Michael Conliffe, who wrote the incidental music which linked the scenes together. And the staging was simple but ingenious. Boxes and props were scattered around, allowing Aluko to move from point to point, picking up books, objects and photos to illustrate specific themes at specific times. In sympathy, his acting turned in an instant from happiness to grief, from enthusiasm to brooding, as the different episodes unfolded.

Amusing by-play was generated by the ever-changing names of Robeson’s female companions. In parallel, reference was made to the growing strains within his marriage to Eslanda ‘Essie’ Goode Robeson (1896-1965). She resented his many passionate affairs but, as Robeson’s ambitious business manager, contributed strongly to the advancement of his career. The play’s episodic format was not, however, geared to a close exploration of the sexual and psychological tensions within their marriage. Her disparaging comments in her biography of her husband Paul Robeson, Negro (1930) go unmentioned, as does his angry response. On such personal matters, it is notoriously hard for outsiders to judge. The play does, however, include a late song, in rather uncomfortable tribute from Robeson to his wife’s rock-like character. They split and reconciled several times, but never divorced.

Robeson was a polymath. As a young man, he graduated from Columbia University law-school, whilst playing as a professional in the National Football League. He became a celebrated concert-singer, film star, and stage actor, being the first African American to play Othello, with a white supporting cast, on Broadway. He was a staunch campaigner for human rights within America and an internationalist, aroused to active anti-fascism by the Spanish Civil War. As his career took him around the world, Robeson felt that he was better appreciated outside the USA than he was by his compatriots. For a time he had a house in Hampstead; and, at another time, he lived in Moscow, with his son Pauli. He sought to study his African origins but also to identify the bedrocks of a universal musical language. Above all, Robeson wanted to be accepted as a human being and musician in his own right, not just to be labelled by his ethnicity.

His later years were difficult. During the Cold War years, many Americans viewed Robeson as little more than a ‘godless communist’, although he proclaimed himself not as a communist but a socialist. He was notoriously grilled by the McCarthyite House of Un-American Activities Committee (HUAC) – whence the title of this play: ‘Calling Mr Robeson’. From 1950-57, the State Department blacklisted him, refusing him a passport and the opportunity to travel overseas. Exhausting legal and political challenges followed.

Robeson, who accepted the International Stalin Prize in 1953, also became controversial on the political left and within the American civil rights movement. He feared that he was becoming air-brushed out of history. Despite getting his passport back and launching upon successful comeback tours, he now had a controversial past. Younger activists increasingly ignored his achievements. After a failed suicide bid in Moscow in 1961, Robeson became chronically ill and depressed, on heavy medication. He lived in seclusion with his wife and, after her death, with his son. Throughout, he kept his dignity; and he never rescinded his commitment to socialism and to human rights world-wide.

As indicated in the question-and-answer session at the end, Robeson remains both admired and contentious. The receding tides of history have marooned his uncritical belief in Soviet-style communism. Was he indeed just another of the ‘useful idiots’ (in Stalin’s phrase) who helped to deceive the international community and especially the political Left about the true nature of Stalinism? Should or could Robeson have protested publicly against Soviet communism’s own injustices, about which he was, however reluctantly, becoming aware? The answer is surely yes. Yet this play makes his political journey innerly comprehensible, without necessarily endorsing every step on the way.

Together, Paul Robeson’s life and songs bore witness to his multiple commitments, about which this play invites its audiences to reflect. Those who live quiet lives, their heads below the parapet, may wonder how they would have fared with such a career, in such testing times. And his songs live on: listen to Robeson’s recordings of ‘Now Sleeps the Crimson Petal’, ‘Joe Hill’, or ‘Going Home’. Magnificent – a voice from history for all times.

Call Mr Robeson was directed by Olusola Oyeleye; and designed by Phil Newman. For future performances in the USA, Canada, and the UK, consult www.callmrrobeson.com; ; and Twitter: @CallMrRobeson.

To support the Appeal to save Croydon’s threatened Warehouse Theatre, now in administration, see www.warehousetheatre.co.uk.