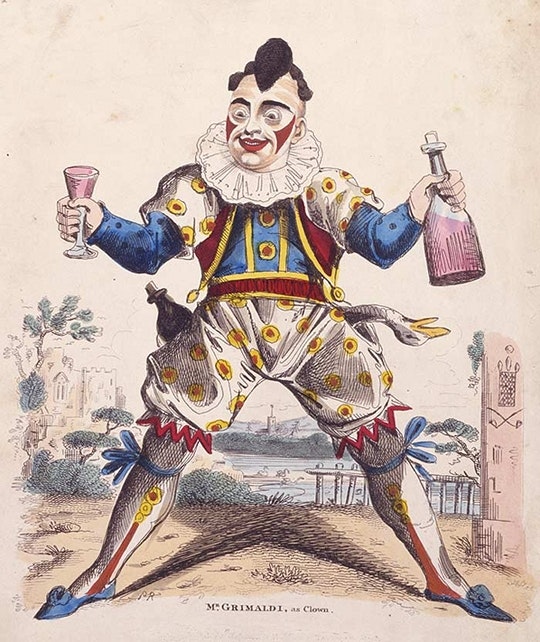 Well, here is an unusual Georgian celebration but a congenial one. As part of the professionalization of many industrial and service occupations,1 the ancient trade of clowning in the eighteenth century came into its own. With population and urban growth, the number of theatres and circuses across Britain also multiplied. They provided evening and holiday entertainments for populations without TVs and radios, let alone without mobile phones and social media.

One who made his name as dancer, actor, comedian and all-round entertainer was Joseph Grimaldi.2 In 1778, he was born in London into an acting family, of Italian ancestry. He began performing as a child. And he threw himself into his roles with great physical energy, getting a number of injuries which took their toll in his later years.

The part that he made especially his own was the clown in the English Harlequinade, which was a theatrical burlesque upon the story of Harlequin and Columbine. Grimaldi was so successful and popular that other clowns were named after him as ‘Joey’. His trademark ‘whiteface’ also became much copied by his fellow artistes.

Grimaldi had the confidence, above all, to develop the art of comic interaction with his audiences. One of his famous catch-phrases was: ‘Well, here we are again’. Remarks of that sort indicated to his audiences that it was ok to sit back and be amused. Backchat augmented the collective sense of community and familiarity. It did not free the clown from the obligation to be funny. But it helped by getting audiences into a good mood – and into a state of expectation. Grimaldi’s clown mask and costume thus gave him a head start.

Nonetheless, there was a certain pressure in performing regularly and being always expected to provoke laughter. Grimaldi, who constantly played the London theatres and also toured extensively, was caught in an all-consuming professional role, calling upon both intense physical agility and a keen sense of social satire. He fused traditional slapstick with an urban knowingness and irreverence. It was a demanding combination; and it was not surprising that, from time to time, Grimaldi fell out with theatre producers – and eventually with his own family. He retired from the stage, reluctantly, in 1823 (in his mid-forties), although he returned for occasional benefit performances. In his last years, he was often depressed, physically ailing, and short of money.

Yet Grimaldi on stage epitomised the joy of unbridled laughter. He became the ‘quintessential’ clown. A sort of secular patron-saint of the role. By the mid-nineteenth century, his comic qualities had become almost proverbial. Oldsters would shake their heads and say: ‘Ah! You should have seen Grimaldi!’

Professional clowns who followed in his footsteps were glad to have such a sparkling role model. In Islington, a small park bearing his name is located just off the Pentonville Road. It lies in the former burial grounds of an Anglican Chapel, where Grimaldi is buried. A new public artwork there is dedicated to him and to Charles Dibdin (1768-1833), the dramatist and theatrical proprietor.

Moreover – and here is the February link – on the first Sunday in February each year an Annual Clowns Service is held in Holy Trinity Church, Hackney, East London. The event has been held annually since the mid-1940s. And it is attended by hundreds of clowns, all in full costume.

What a tribute to the power of memory, to the joy of shared laughter, and to the impact of a pioneering life. Today, there are many brilliant comedians – on stages, in circuses, in print, and on all forms of social media. All praiseworthy, some truly hilarious! ‘Ah! [but] you should have seen Grimaldi!’

MONTHLY BLOG 24, HISTORY AS THE STAPLE OF A CIVIC EDUCATION

MONTHLY BLOG 135, A YEAR OF GEORGIAN CELEBRATIONS – 3: THE SCOTTISH MUSIC...
Scroll to top