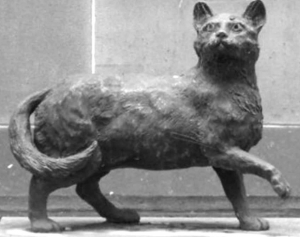 Another feisty sea-going cat from the eighteenth century has inspired a great set of contemporary statues in both England and Australia.1 This cat was jet black, with white feet and a white star on its breast. He was named Trim, after the devoted servant and companion-at-arms in Laurence Sterne’s whimsical novel Tristram Shandy (1759). And in the years 1801-3 the cat participated in the first recorded circumnavigation of Australia with Captain Matthew Flinders, the explorer and cartographer.2 It was he who later paid Trim the compliment of writing a special account of its life history, preserving its memory for posterity.3

At one point on the trip round Australia, the adventurous feline was washed overboard. But it swam/scrambled to reach a floating rope and clambered determinedly up to safety, winning the captain’s admiration. Indeed, Flinders later saluted Trim as ‘one of the finest animals I ever saw’. The cat had in fact been born on a ship and lived much of its life on board a series of different vessels. So it clearly had the feline equivalent of ‘sea-legs’. It also had a degree of good luck, surviving, with Flinders, the shipwreck of HMS Porpoise in 1803. (The disaster happened on the Wreck Reefs in the Coral Sea, off north-eastern Australia – an area now preserved as a historic shipwreck site).

Trim thus became something of a mascot for Flinders and his crew. Many cats were in fact to be found on board ships.4 They were recruited as mousers, providing on-board pest control. But they often provided affection and companionship as well. Flinders was not short of human company on his circumnavigation. One leading member of his team was a community leader named Bungaree, who came from the indigenous people of eastern Australia. He provided invaluable help as guide and negotiator.5 On more than one occasion on the long journey, he averted conflict between the sailors and various indigenous communities, with whom he managed to communicate, despite the linguistic barriers. Flinders, who wrote warmly of Bungaree’s ‘open and manly conduct’, also appreciated his kindness to Trim.

This adventurous cat was thus an archetype of the many travelling felines who appear in myths and legends.6 In such tales, their natures are resourceful and affectionate, without being dependent or needy. Cats like the companion of Dick Whittington; or Puss-in-Boots (who appears in many European variants); or the cat who proverbially ‘looks at a king’ are cool customers. They star in many folk cultures around the world, featuring in songs and musicals as well as art and cartoons. It is no surprise to find also that travelling cats are imagined as voyagers in space fiction.7 Shared adventures are integral to the long history of human-feline interactions.

What ultimately bonded Trim and Matthew Flinders, however, was their joint experience of imprisonment. On his return from Australia to Britain, the navigator put into the French-held island of Mauritius, hoping that his status as a scientific investigator would secure him safe passage. However, the governor detained him. France and Britain were then at war; and Flinders’ motives were suspected. He was held there from December 1803 to summer 1810, at first in close captivity, and then with greater freedom but without the right to leave. Trim kept Flinders company for most of this period of irksome inactivity; and it was when the cat disappeared suddenly some time in c.1808 (its fate unknown), that Flinders was moved to pen his account of the cat’s life. His warm tribute, stating that Trim was ‘ever the delight and pleasure of his fellow voyagers’, undeniably came from the heart.

Matthew Flinders has been extensively commemorated in Australia. Not only are there many places and institutions which bear his name (including the renowned Flinders University in Adelaide) but he himself named many features around the coast, in the course of circumnavigation. Bungaree has been much less well served, in terms of public commemorations. But Boongaree Island, off the Kimberley coast of Western Australia, was named after him in 1820; and there have been some nautical tributes. (A public statue is surely overdue).

Meanwhile, the cultural star of Trim has risen in recent years. The publication of Flinders’ cat-biography in 1977, allied to the increasing contemporary desire to humanise past heroes, has brought the intrepid feline voyager to public attention. In 1996, John Cornwell’s bronze statue of Trim (Fig.1) was installed outside the Mitchell Library (State Library of New South Wales) in Sydney. The striking representation was an immediate success. The Library began to sell a range of Trim memorabilia and it names its restaurant as Café Trim. In 2006, another engaging statue of Flinders was installed in Donington, his Lincolnshire birthplace. In this case Trim leans confidently against the navigator’s leg, in a style which is obviously cat-like but not subservient. The statue was created by Judith Holmes Drewry, with input from local schoolchildren. Their joint project helped to foster local interest in Flinders, which has recently culminated in a successful campaign to have his remains reburied in Donington’s parish church. 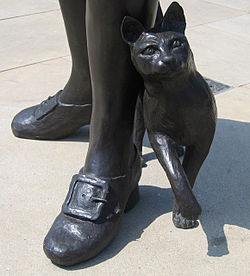 There is also one fine composite statue of Flinders, with Trim on the lookout, both crouching over a chart of the territory of Terra Australis, Flinders being one of the most determined to popularise its name as Australia. This monument, devised by Mark Richards, was erected in 2014. It was timed to commemorate the bicentenary of Flinders’ death in 1814, at the comparatively early age of 40. And the statue was aptly located at Euston Station, which was later constructed over the graveyard where the navigator was buried.8 (His coffin was discovered in 2019 during excavations for the new high-speed rail link, leading to the successful campaign for Flinders to be reinterred at Donington). 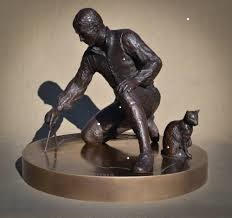 So these companions on the move are commemorated in multiple locations. The moral, from the viewpoint of a feline wishing to be remembered by posterity, was to be loved by a writer with time to write a cat-biography on its behalf. And for Flinders? He was a great namer of places: among others, Australia’s Port Lincoln, after the county of his birth; Kangaroo Island, named for the abundant wildlife there; Encounter Cove, where he met and exchanged news of his discoveries with the French scientist Nicholas Baudin, who was also exploring the world far from his homeland. Naming has a certain power – not supreme power; but influential. And, yes: Flinders did well to identify the feisty black cat with white feet as Trim – neat, natty, nautical, appealing, affecrtionate – and now memorable as well.