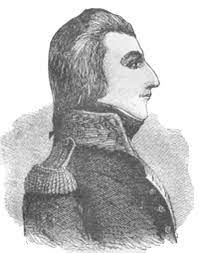 Continuing the story of through-time links from the Georgian era,1 this BLOG focuses upon a highly significant commemorative walk at Bodenstown (co. Kildare). It celebrates each summer the short life and visionary hopes of the revolutionary Irishman, Theobald Wolfe Tone (1763-98).

He was known as a man of principle and valour. Yet his political views were highly utopian and equally controversial. He hoped to unite his fellow Irishmen, whether Anglican, Presbyterian or Catholic, through a shared commitment to Irish nationalism and republicanism.2 He did not, however, have any practical plans to overcome centuries of religious mistrust and the power imbalance between the contending faiths. (Not an easy task in any era).

In the event, Wolfe Tone chose alliance with revolutionary France. Nothing could be more likely to enrage the Irish Protestant establishment and the British government. When therefore in summer 1798 a radical alliance of United Irishmen launched a rebellion,3 the official response was quick and decisive repression. Wolfe Tone meanwhile sailed from self-exile in France, with a French raiding party, to support the uprising. But he was caught, identified, and convicted by court-martial as a traitor. Soon after, he died in a Dublin prison, the night before he was due to be hung. It may well have been suicide. It certainly was immediate political failure.

However, over time, Wolfe Tone became a paradoxical legend.4 There are today sundry public monuments to him as an Irish patriot. Catholics especially saw him as pioneer of separatist nationalism. That cause was certainly highly important to him. Yet Wolfe Tone’s desire for an associated process of reconciliation between Ireland’s contending faiths was publicly ignored.

It was Catholics who began, a generation after his death, to visit his grave at Bodenstown in tribute. From 1873 onwards (with gaps in some years) the commemorative format evolved into a communal walk. The route starts at Sallins station, thus allowing many Dubliners to attend by train. And the procession makes its way to the Bodenstown graveyard – a distance of about 2.5 km or just over 1.5 miles – where wreaths are laid and a prominent speaker gives an oration.5

Broadly, the atmosphere is both respectful and celebratory. However, there are sometimes tensions between rival political groups. And sometimes even rival processions. Moreover, when in 1934, a radical group of Belfast Presbyterians walked the walk, carrying banners saluting Wolfe Tone, they were met by punches and kicks from the Catholic crowd. This cold welcome was allegedly ordered by the IRA.6 It was not in the spirit of Wolfe Tone.

Co-walking in support of a common cause can promote harmony and rally support. Music adds a festive touch, and helps the walkers to maintain the pace. Flying flags and banners can meanwhile enlighten onlookers. Walks and marches are a flexible and democratic form of public affirmation. They do not require huge funds. Numbers participating may be tiny or huge, depending on the cause, the legal status of public gatherings, and, sometimes too, the weather.

Little wonder then that there are many varieties of communal walks. They range from protest marches, to commemorative walks, to sponsored fund-raising hikes, to organised parades, and on to military and high-school marching bands. Together, these peregrinations constitute a secularised update of traditional religious pilgrimages – which, of course, also continue.7 Within that global phenomenon, Ireland, where Protestants and Catholics have long sponsored rival marches, is a walking hotspot. And the Irish overseas also remain notable community walkers.

The full message of Wolfe Tone’s personal career and his legendary afterlife is, however, a sombre one. It takes more than goodwill and walking together to achieve real reconciliation between contending groups. Violence and counter-violence generate bitterness and resentments, which can often last for centuries. Reconciliation entails inculcating genuine toleration, confronting frankly past misdeeds, righting wrongs (on all sides), achieving a degree of power redistribution or readjustment, opening economic opportunities for all, and generating pan-community trust and love. Not an easy programme, at any time. Hard to achieve in one divided country (let alone globally). But as urgent today as under the Georgians, as no doubt Wolfe Tone would staunchly insist.

4 S. Ollivier, Presence and Absence of Wolfe Tone during the Centenary Commemoration of the 1798 Irish Rebellion (Dublin, 2001); P. Metscher, Republicanism and Socialism in Ireland: From Wolfe Tone to James Connolly (Dublin, 2016).

5 C.J. Woods: Bodenstown Revisited: The Grave of Theobald Wolfe Tone, its Monuments and its Pilgrimages (Dublin, 2018).

7 L.K. Davidson and D.M. Gitlitz, Pilgrimage – from the Ganges to Graceland: An Encyclopedia (2002).