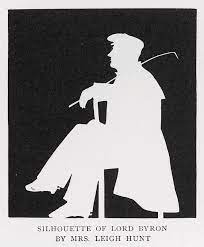 Good-looking, debonair, raffish, sexy, attractive to both men and women, a breezy poet, a dog-lover, a radical in his politics, supporting working-class interests at home and Greek independence overseas, and a man with a title – George Gordon, Lord Byron (1788-1824), seemed almost too amazing to be true.1 But add into the mix the further pertinent facts that he was chronically impoverished; that he had a deformed foot, which gave him pain and forced him to walk with a limp; that he took to travelling restlessly overseas; that his marriage to Anne Isabella Milbanke was unhappy; that many of his affairs were also tormented and short-lived; that there were accusations of incest with his half-sister and marital violence; that, as a result, Byron was considered deeply controversial by respectable society; … and his story was not straightforward.

Today, the adjective ‘Byronic’ continues to reference the concept of a darkly brooding, attractive, flawed genius, whose life, interests, and achievements continue to attract public attention – whilst remaining hard to decipher. His spirit echoes in many a subsequent darkly brooding, ‘mad, bad’, hero in literature and, later, in film.

Immediately after Byron’s death, there was considerable hesitation in England as to how such a life should best be commemorated. Westminster Abbey refused to allow his body to be buried there; and, later in 1834, a statue of Byron, commissioned by his friends, was rejected by numerous august locations (including Westminster Abbey) and was  left in storage for some time. His raffish reputation, with its mix of radical politics as well as unconventional sex, cast a long shadow.

Later, there were campaigns to get a monument to Byron in the Poets’ Corner at Westminster Abbey, which was becoming an established focus for national literary remembrance. Yet the campaign succeeded only in 1969.

By contrast, Byron became revered in Greece. He died at Messolonghi, at the north-western end of the Gulf of Patras. And he was there preparing to fight, with a rebel band of supporters, to aid the campaigns to liberate Greece from the Ottoman Turks. Such dedication to a ‘foreign’ cause was heroic. To it, Byron devoted his energies and all the family financial resources that he could muster. Today in central Athens, a substantial statue shows Greece as a robed woman, crowning an upright, manly Lord Byron with a palm branch (a Near Eastern symbol of victory and immortality). He has found a home. And the anniversary of his death has been (since 2008) honoured in Greece as ‘Byron Day’.

But the most engaging of all tributes to this distinctive man is an annual group swim. Byron in his lifetime dieted frequently, to keep his weight down; and exercised regularly, being good at horse-riding and amateur boxing. Indeed, for a while, he took sparring lessons with a former prize-fighting champion.

It was open-air swimming, however, for which Byron became especially famed. In May 1810, he swam from Europe to Asia, across the Dardanelles, known in classical times as the Hellespont. It was not the first time that the deed was done – and Byron did not literally invent the pastime of open-air swimming. But his feat in 1810 became infinitely the most famous case, since the classical Greek legend of Leander who swam across nightly to join his lady love, Hero. Byron knew this story of legendary passion – and tried the swim to see if it could really be done. He failed on his first attempt but succeeded on his second.

The Dardanelles Strait/ Turkish: Çanakkale Boğazı is a turbulent stretch of water, with a strong flow and treacherous cross-currents. It now makes a suitable site for the world’s most famous open-air long-distance swimming challenge, held each summer at the end of August.2 Indeed it is the iconic event for the sport. Participants are advised to pre-check their medical fitness; and to have considerable prior experience.

Faint-hearts are thus wise to stay away. But there are plenty who relish the risks. The race distance covers some 4.5km (just under 3 miles), swimming with the currents. While the event is in progress, all shipping lanes are closed. And Turkish coast-guards are on standby, ready to help swimmers who have become too tired or who are being swept off track by tricky cross-currents.

What would Byron think? Hard not to be gratified at being remembered by a challenging and exciting event in which both men and women participate. Very Byronic. And it’s also a swim that crosses historic geographical boundaries – an ecumenical theme with apt resonance for this cultural migrant.

Byron himself wrote poetically about the lure of the sea: ‘There is a rapture on the lonely shore/ There is society where none intrudes/ By the deep Sea; and music in its roar’.3 It was romantic. It was deeply personal. It offered escape for a lonely man with a conflicted life. And he followed the above lines with a personal credo: ‘I love not Man the less, but Nature more’. So this tumultuous stretch of sea at the Dardanelles is Lord Byron’s true monument. ‘Roll on, thou deep and dark blue Ocean – roll!’ And it does.

1 A fine introduction to the huge literature on Byron is available in D. Bone (ed.), The Cambridge Companion to Byron (Cambridge, 2004). See also N.B. Oueijan, Byron and Mythology (New York, 2020).

2 Becky Horsbrugh, ‘The Hellespont Swim: Following in Byron’s Wake’, The Guardian (6 May 2010): https://www.theguardian.com/lifeandstyle/2010/may/06/hellespont-swim-byron.