Quotations should never be mangled and should always be cited honestly, with due attention to context. Yes – absolutely yes.  It’s axiomatic for all scholarship – but also for proper communications. It does happen that words are taken out of context and twisted into another meaning. But it’s never right.

To take an example: if a theatre critic sees a controversial play and writes: ‘The very last thing that I’d say is that this production is brilliant’, then the theatre’s publicity team could put the critic’s name in lights alongside the quotation: ‘This production is brilliant’. Factually, those attributed words are correct. The critic did write them. Yet the truncated quotation gives the reverse meaning to that intended. Both the critic and any members of the audience, who were deceived into attending on the strength of the critic’s recommendation, have grounds for complaint.

Another potential for misunderstanding comes when heavy irony is taken at face value. In one of Shakespeare’s famous oratorical set-pieces, Mark Antony mourns the assassination of Caesar by Brutus and his allies with the repeated phrase: ‘And Brutus is an honourable man’ … [They are all] ‘honourable men’. The stress upon the repeated phrase, like a refrain, urges the Roman crowd to understand that the words mean the reverse of what they apparently say.

By the end, the citizens turn against the assassins: ‘They were traitors: honourable men!’1  On the face of it, Mark Antony has given Brutus a favourable character reference. In context, however, he stands condemned, not just as an assassin but as one who has basely betrayed his closest friend and colleague. ‘This was the unkindest cut of all’.

Nonetheless, there is a problem for anyone who uses irony. If the listeners or readers fail to get the implied message, then they will come to an erroneous conclusion. A Roman citizen who left the forum after the opening phrases of Antony’s speech (or who wasn’t listening carefully) could depart thinking: ‘I was sorry to hear of  Caesar’s death but it must be acceptable as Brutus, a man of honour, explained why he had to do it, and Antony confirms that Brutus is an honourable man’.

Irony, then, is powerful but risky. It depends upon an attentive community between speaker/writer and audience/readers which allows the words to be decoded successfully.

For historians, quoting from sources whose authors have long gone, there is always a challenge to understand meanings in their full context. When does a word or phrase in use mean its opposite? And did people in the past always get the hidden message?

When Jonathan Swift published his Modest Proposal for Preventing the Children of Poor People from being a Burthen to their Parents or Country, and for Making them Beneficial to the Publick (1729), he provided an exercise in sustained irony that revealed itself through the moral enormity of the proposed solution. ‘A young healthy child well nursed, is, at a year old, a most delicious nourishing and wholesome food.’ Poor parents would solve their financial problems by selling their children, who would provide good food for the rich. Infanticide? Cannibalism? Class callousness? Swift does not advocate these. Instead, his irony conveys outrage at the poverty of the poor and the indifference of the rich. 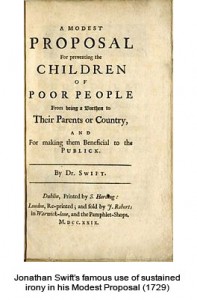 Why am I writing about this now? Because I am currently thinking about the use of evidence and the dangers of inadvertent misinterpretation. The question really arises when using a lot of sources in a historical collage.

I have just done that in an essay, published in Social History, on eighteenth-century Britain as an ‘Age of Infidelity’.2  It cites at least 75 contemporary verdicts on the state of religion and irreligion. Many are book titles, some are declarations within books, some are printed texts reporting upon speeches and sermons.

A proportion of these works were clearly using overblown rhetoric, uttered in times of crisis. When John Bowlder agonised in 1798 that the British nation’s lack of faith seemed to portend nothing less than ‘the eradicating [of] Christianity in this Quarter of the World’,3  it is hard not to smile. Religion had more staying power than he was ready to admit. On the other hand, Bowdler’s deep anxiety was typical of many committed Christians in the later 1790s, when Britain was struggling in the prolonged war against France. Why such extreme danger? It could only be that God was angry with the nation for its irreligious ways.

Bowdler not only wrote to chastise the people but took practical steps to offer a remedy. He co-founded the Church Building Society,4  which provided new places of worship in the newly expanding towns. In my Social History essay, I am able to give further information about Bowdler, as he was a particularly notable contributor to the debates. His name on its own attracts interest. Two of his children, Thomas and Henrietta Bowdler, removed all the saucy bits from Shakespeare, in order to make the bard acceptable for respectable family reading.5  Their reward was much public ridicule – and the invention of a new verb ‘to bowdlerise’. Such contextual information illuminates the era’s culture wars, in which the Bowdlers were eager partisans.

But, in an essay of approximately 7,000 words, it’s not possible to devote equal attention to the other 74 eighteenth-century contemporaries – laypeople as well as clergymen – who expressed views on the state of religion. It would overrun the restricted length of a scholarly essay – and confuse the unfolding analysis. Naturally, I checked all the sources that I used, for both content and context. And I especially searched for rival tracts, arguing that the eighteenth century was an ‘Age of Faith’ or equivalent.

Is it possible that I missed some exercises in irony? Logically, yes, although I hope not. (Please check my sources, all duly footnoted!) Sustained Swiftian-style irony is comparatively rare. Moreover, people writing on the state of irreligion tended to be heated and passionate rather than coolly playing with double meanings.

What I do claim to have found is not a debate without the potential for irony but instead one which circulated a new eighteenth-century cliché. It stated that the era was ‘an Age of Infidelity’. By this phrase, the commentators did not refer to people’s unfaithfulness to their marriage vows. That constituted ‘conjugal infidelity’, plentiful enough but far from unique to the eighteenth century. Nor did the commentators refer to apostacy: Christians in this period were not turning into Islamic or Jewish or any other religious variety of ‘infidels’.

No, it was the spread of secularisation that was being noted, chiefly in alarm: the advent of a society, officially Christian, where people had the option of not going to church, not following Christian lifestyles, and (even) not sharing Christian beliefs. It is possible that some eighteenth-century references to the ‘Age of Infidelity’ were meant ironically. But, if all that the commentators left were the unvarnished words, then they are liable to be read literally.

Ironists beware. Unless your double meaning is suitably signalled, it will become lost in time.

4  For the CBS, now part of the National Churches Trust, see www.churchplansonline.org.