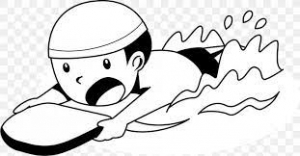 Having been an enthusiastic swimmer all my life, it was a shock to be told casually by a friendly swimming-pool attendant that I was squandering my efforts by swimming wrongly. That is, I was using my arms for propulsion and merely wiggling my feet as rudders to improve direction. I was sceptical. But I accepted the challenge to swim a length of the pool, holding onto a float, and using nothing but my legs.

It was mortifying. I could hardly move. In addition, I immediately realised that the small and apparently tranquil leisure-pool has quite strong currents. These are caused by the swirl of the waters that are constantly pumped in to keep the ambience clean and fresh. My kicking was so feeble that the float – or rather the currents – were taking charge.

Turning to my pool-side mentor, I wondered what to do. ‘Kick harder’, she replied. Stung, I followed her advice. But the outcome was still mortifying. I could just about surmount the currents in the pool’s centre but, once I got to the edges, where the tides scour with special force, I was stuck again. It was objectively funny to be very close to the finishing tape, kicking away lustily, but unable to get to the edge. But, subjectively, I was not amused.

Well, I went back to basics. In the next two months, I sorted out firstly how best to breathe steadily on the float, instead of alternatively kicking and breathing. I then reviewed my leg movements and decided upon a more piston-like action. It took some time to get it; but it began to work. I had to use the entire leg, rather than just wiggling my toes. I knew that something radical was happening when I got spasms in my lower back, as torpid muscles were suddenly kicked into action after literally decades of under-use.

Basically, it seems that, not only had I been swimming weakly but I was also walking with only half-leg power. I’d been sort-of-gliding, holding my torso still and using only my calf muscles. Upon reflection, I realised that this state of affairs could be traced back to a serious fall which I had at the age of seventeen. In fact, it began as a joyous jump on a moonlit summer evening in Italy. I leapt from a high seaside promenade down onto the sandy beach. But I’d seriously miscalculated. (I blame the moonlight). The fall was uncontrolled, ending with great force. Fortunately no bones were broken. I got up, after recovering my breath, and continued strolling under the stars, with a group of teenager friends, who responded with gentle indifference.

In fact, however, I’d dislodged my pelvis. There was nothing to see; and the harmful effects on my knees became apparent only years later. Various osteopaths gradually managed to improve matters. Yet it was only when I persevered for weeks at hearty kicking with both legs, while buoyed in water, that things finally righted themselves. It was a shock, but a most agreeable one.

And about time too! My kicking with the float is still improving. My ordinary swimming has become stronger, with the aid of proper leg power. And I now walk briskly, swinging my hips, lifting my feet, and singing lustily as I go. Leaping from a high promenade felt (briefly) like flying. Yet getting old bones back into their proper alignment feels infinitely more euphoric.

MONTHLY BLOG 130, MEANINGS OF BEING PENELOPE
Scroll to top