Currently, fashionable chatter on the new political Right refers approvingly to the case for ‘chaos’. That view is voiced by Nick Boles, Conservative MP for Grantham and Stamford, author of Which Way’s Up? The Future for Coalition Britain (2010). Out of institutional turmoil, financial cuts, and the end of central planning there will – supposedly – emerge a benign new localised order, freed from the shackles of the contemporary state. The premise is that things should not be as they are. So the uncertainty of chaos is needed to encourage change. But history provides no guarantees that the outcome will be the one desired.

Rather more traditionally, the hard political Left also hopes for ‘revolution’. It’s not the same as ‘chaos’, though it contains the same hope. Out of upheaval will emerge the desired socio-political transformation. In fact, it has proved difficult to achieve such sweeping changes. It takes a total crisis to offer a revolutionary opportunity (as in Russia in 1917). But, even after that, it remains hard to keep a revolutionary regime in power against internal and external enemies, without compromising the original ideals that animated the revolution in the first place. Soviet Russia offers a sad example.

So why the apparent enthusiasm for chaos or revolution? Such attitudes mark an impatience with the strong forces of tradition and vested interests (see my October Discussion-point). And, in certain circumstances, there may be no alternative to drastic action.

But what about the case for the subtle power of gradual change? Perhaps slow transformation seems simply too tardy for today’s politicians. After all, they are constantly beset by demands for instant headlines and instant results. Belief in gradual change has also been tainted by its past association an infallible and unstoppable ‘Progress’. The horrendous experiences of the twentieth century – in terms of world wars, genocides, mass famines, and killer epidemics – have discouraged any easy belief that things are slowly getting better across the board.

On the other hand, there are still some things to be said in favour of gradualism. It marks gentle ‘progression’ rather than inevitable ‘Progress’.

As a political method, it works by trying to convince people. They are to be wooed, not bludgeoned. ‘Slow but sure’ runs the adage. Festina lente – ‘make haste slowly’. ‘More haste, less speed’. Follow the example of the Roman consul Fabius Maximus. Avoid battle or direct confrontation, especially when likely to lose. Play for the long term. But don’t give up either. Fabianism is no excuse for inertia but an invitation to join the ‘long march’.

Historically, there are many examples of how patient advocacy over time can change social attitudes. Once majority opinion in many cultures held that human slavery was permissible and acceptable – even necessary and justifiable – in certain circumstances. The first few campaigners against the practice were condemned for their utter unrealism. Now, however, world-wide opinion holds that slavery is a social evil, even though various forms of personal unfreedom still – shamingly – exist in practice. Official beliefs have changed, collectively and gradually. Even those who covertly disagree find that they have to endorse the new line publicly. And there are reasons to hope that, eventually, the practices of covert slavery will also be stopped, in line with the reversal of world opinion from pro- to anti-slavery.

In fact, cultural attitudes, languages, and ideas are characteristically aspects of human life where transformations occur slowly and gradually. Individuals may often find that they have changed their views imperceptibly over some particular issue – without remembering particularly when and how the change happened. One common, though not invariable, pattern is a shift from youthful radicalism to an older hostility to innovation. Or it could be a move from earlier pacifism to later bellicosity. Of course, sudden and explicit conversions are also known. But gradual adaptations are very characteristic.

Slow evolution, after all, is a regular part of the physical world, of which humans form part. In biology, micro-change is the characteristic form of species adaptation through natural selection over time. That pattern was convincingly demonstrated in the mid-nineteenth century by Alfred Russel Wallace and, most famously, by Charles Darwin. His field observations substantiated the classic dictum: Natura non facit saltum – Nature does not proceed by sudden leaps and bounds.

The precise mechanisms of change remain debated; and the possibility of natural catastrophes are also canvassed. Nonetheless, the biological centrality of gradual change remains undoubted. And individuals, who find themselves imperceptibly ageing, know the process at first hand. It happened to Charles Darwin (1809-82), as shown in these likenesses of him aged 31 in 1840 (Left); aged 45 in 1854 (Right); and aged 60 in 1869 (Bottom Left). 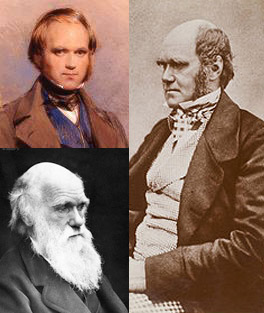 Lastly, for historians, it is also not surprising to find that gradual change is a powerful force in human history. There are many long-term trends that are slow and relatively imperceptible at the time. One example is the world-wide spread of literacy since circa 1700. Certainly there have been oscillations in the trend; but it is unlikely to be reversed, short of global catastrophe.

Another long-term development post-1700 is the process of global urbanisation, with a continuing growth in the proportion of the world’s population living and working in towns. In addition, the numbers living in great cities of 1,000,000+ has also expanded dramatically. Again, this trend has not been linear. But it is highly unlikely to be reversed – again short of catastrophe.

And finally, what about the contemporary state? It has not arrived out of the blue, as an imposition upon its citizens. Instead, it has emerged slowly, along complex routes – from its origins in monarchical society to its officially democratised version today. Sure, there is much more to do by way of making popular participation in politics more systematic and more effective. Sure, too, there are continuing areas for debate as to how much the state can do and should do. But, again, the emergence of orderly government and a collective sustaining of the rule of law is a trend that has long emerged – is still emerging in some lawless parts of the world – and ought to be encouraged.

With collective urbanisation has come the need for effective governance. With the spread of literacy has come the pressures to democratise – with further steps yet required. And with global population growth has come the collective need to manage the planet for the survival of humans and our fellow species.

‘Chaos’ in the full sense means destruction, not salvation. It means running against the grain of historical trends. So let politicians have a sense of modesty about their own roles and aims. Gradual change is more natural, more sustainable, and socially more pleasant. Progress may have been an ideal too far. But steady progression marks how things actually work – and ought to work.