Referenda seek to answer big questions with big answers: let the people speak. But they also constrain voters. They are called upon to choose between simple either/or alternatives. In practice, however, referenda are not always easy to answer. There are plenty of cases when many would reply: yes to the proposition, in this or that given set of circumstances; but no, in the event of another set of circumstances. And there is no scope (other than spoiling the ballot paper) for those who would reply to the options: neither of the above. In other words, referenda are unsubtle. 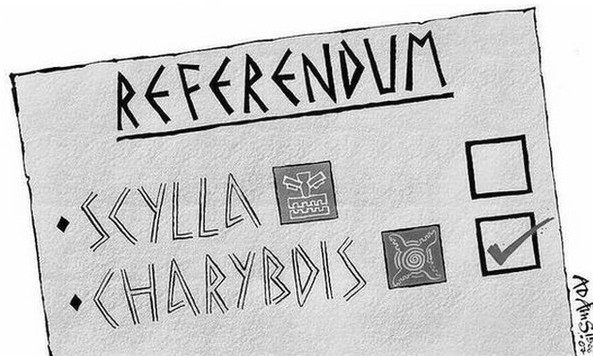 The art of governance entails much more than answering a sequence of binary questions: yes/no. The complex arts of politics, balancing, assessing and deciding between often conflicting requirements, are still required.

For that reason, there are good, practical reasons for avoiding too many referenda; and, when they are deemed necessary, for ensuring that choices are posed with reference to one big clear issue, which, if it is to be accepted, requires the whole-hearted support of the people.

A fine example of good referendum-politics was seen in the twin referenda in Northern Ireland and the Republic of Ireland in May 1998, following the Good Friday Agreement. In the Six Counties, the electorate was asked whether it wished to approve the deal brokered by the multi-party talks, envisaging a power-sharing executive. In a large turnout of almost a million voters, 71.1% voted in favour and 28.9% against. Simultaneously, the electorate in the Republic was asked whether it approved the British-Irish agreement, which entailed amending the Republic’s 1937 constitution to end its ‘territorial claim’ to the North. The turnout in this referendum (56% of the electorate) was much less emphatic. But the result was completely decisive: 94.39% voted yes; 5.61% no.1 That outcome still left scope for the potential reunification of Ireland, at some future date. The amended clauses express such a policy objective, but subject to consent on all sides. In other words, the victory was one for due political process, as opposed to civil war. It was a triumph for democracy, across two neighbouring countries with a shared and complicated history.

By contrast, the State of California has a long tradition of voting on ‘People’s Propositions’ which, if passed, add new and permanent clauses into the state constitution. These plebiscites enact a form of direct democracy, which functions alongside representative democracy, but not always with complete ease.

One obvious problem is what happens if two Propositions are both passed in the same year but directly contradict one another? The answer is that the referendum with the highest number (not proportion) of affirmative votes takes precedence and the other falls. But what happens if two Propositions are passed on different occasions, but still contradict or work against each other? That difficulty remains an unresolved problem.

Currently, the California state legislature has to work not only in the light of Proposition 13 (passed in 1978) which puts inflexible limits2 upon the amount of direct taxation raised upon real estate; but also with Proposition 98 (passed in 1988) which mandates specific percentages of the state budget to be spent on education. The result is that California’s politicians face severe constitutional constraints upon their budgetary flexibility. In effect, the politicians elected by today’s voters are being overruled by prior decisions made by voters a generation earlier.3 A democrat could well argue that levels of taxation and state expenditure are not constitutional fundamentals but matters of day-to-day, year-to-year politics.

Yet who is to decide what should or should not become a fundamental, unchangeable rule? If the people have solemnly so decreed, they have so decreed, unless there is some mechanism for constitutional review or updating.

Another case from California illustrates a different problem. Difficulties have followed from the ramifications of Proposition 65 (1986), which protects drinking water, and consumer products in California generally, from toxic chemicals, via a mandatory warning system. It has the beneficial effect of raising both consumer and business awareness of environmental hazards. Hard to object.

At the same time, however, the mandated system of enforcement was left deliberately open to private citizens as well as to state officials. As a result, it has opened the way to ‘bounty-hunting’ litigation, undertaken, so it is claimed, by private attorneys who prosecute any Californian businesses, which may not have listed every possible toxic element. All fees won go to the law firms, without any gain to the state’s citizens. To safeguard themselves, many businesses resort to vague general warnings, which spread alarm without providing any practical help. Here the problem is not the good intentions of the Proposition, but the mandated nature of its regulatory system.4 It deprives the state legislature of the chance to monitor its working and to adapt its procedures, if need be. Some management reforms to this Proposition were introduced by a consensus bill in the California Assembly in 2013; but further reforms, apparently being discussed by Governor Jerry Brown, have yet to materialise. There seems to be an impasse.

So what follows? For me, one immediate lesson is that the high status of a constitutional rule is such that a referendum to impose or change one should not be lightly used. Effectively, such plebiscites overrule and outrank ordinary democratic processes. In exceptional circumstances, such as in Ireland in 1998, that worked supremely well. But, at other times, it may produce conflicting answers, between the one-off verdict in a referendum and the iterative processes of daily politics, which are required to apply referendum results in practice. (As a result, there’s a possibility of eventual ‘Leave’ disillusionment after the Brexit vote in June 2016, which, when matched by continuing ‘Remain’ disappointment, will give the British electorate the worst of both options).

Secondly, there’s a good case for developing a set of conventions to regulate when and how such processes happen. Britain’s uncodified constitution benefits from its flexibility and openness to the exercise of British empiricism. Yet it can also lead to muddle, incoherence and a potential risk to fundamental principles.5 So there’s a good case for a constitutional pre-agreement between all parties about the whys and wherefores of these big popular inputs into the political system. Obviously, referenda need to be subject to clear and fair rules. They should decide on principles, and not upon administrative details and enforcement. Ideally, too, they should be accompanied by equally thorough documentation of the case for and against the proposition (provided by an independent constitutional commission), so that the electorate is not deciding in the dark. And there’s a good case for pre-agreeing the required percentage majority on a sliding scale (the greater the change the larger the proportion required?) before a decision becomes constitutionally final. Otherwise, referenda which are inconclusively close become symptoms of deep-rooted divisions – and not the answer. They tend to bring politics and politicians further into disrepute. That’s not good for democracy, especially when the outcome appears to pit different regions against one another.

Lastly, there’s much to be said for pre-agreeing the valid circumstances in which big constitutional referenda are to be held. They don’t work very well as tools of day-to-day politics. That way, there’s too much of a risk that the electorate will vote in response to the popularity or otherwise of the government of the day. Indeed, if politicians call referenda for immediate political reasons, it’s logical for the electorate to respond similarly. On the other hand, there’s an excellent case for testing major constitutional changes in the form of government – whether proposed as a matter of internal policy or in an overseas treaty with constitutional implications – by an immediate popular referendum. Not years after the event. But at the time. The twin 1998 referenda on the Good Friday Agreement showed how the deed can be done, and done well. Referenda viewed long? Yes; no; and maybe, in a fitting context.

2 That limit remains one percent of the full cash value of the property, and the Proposition, part of the so-called Taxpayers’ revolt of the late 1970s, also contained clauses requiring two-thirds majority votes in both Houses of the Californian state legislature for any future increases in rates of state tax on income, sales or property.