Why are many Humanities researchers so angry at the conduct of the Arts and Humanities Research Council? Its chief executive Prof. Rick Rylance has not yet managed to assuage his critics. They fear that the AHRC has not kept due operational distance from the present coalition government and the David Cameron slogan ‘the Big Society’.

The ins-and-outs of what has happened are subject to dispute (see reports by Paul Jump in The Times Higher: 29 March 2011; 7 April 2011; 27 June 2011). But there is genuine concern about the AHRC’s Connected Communities project. This cross-research-council programme, led by the AHRC, appears to have become politically partisan. Its draft consultation paper in June 2010 declared that: ‘Radical new policies on the ‘Big Society’ & localism at the heart of the new Coalition Government’s strategy in England … require a step change in research engagement with local communities and groups, the third sector and local government’. That statement is in itself contentious. Should research methodologies really change with every change of government policy?

Moreover, the AHRC website features a 2010 policy context paper (pdf.2053kb) by Dr Bert Provan, Deputy Director in the Department of Communities & Local Government. His presentation quotes David Cameron extensively. It is stated as a truth, and not as a research question, that, in ‘broken Britain’, government is ‘a large part of the problem’. It has allegedly ‘drained the lifeblood’ from community life. Has it really? Internationally, Britain is often envied for its strong tradition of civil society by post-dictatorship countries, where civic associations have long been discouraged. But Provan’s presentation under the title of ‘Connected Communities or Building the “Big Society”’ seems to imply that the CC project (launched in 2008) is being refashioned to endorse and promote the ‘Big Society’ political agenda.

Firstly: the terminology. The ‘Big Society’ has clear party-political connotations. It is not a general term of art. The usual phrase for voluntary activities undertaken communally is ‘civil society’. That term has a clear meaning, with historic and current traction. It is true that, in practice, the boundaries between civil society, the private sector, and central government are blurred. Yet a degree of ‘fuzziness’ attaches to many terms that sub-divide the interlocking nature of human societies. The important thing is that the term ‘civil society’ links to a body of existing research and organisational effort. For example, the South African-based international society Civicus (founded 1993) already offers a Civil Society Index and policy recommendations to enhance citizen participation.1 The term is descriptive and politically neutral – whereas the ‘Big Society’ is used specifically to advocate ‘small government’. 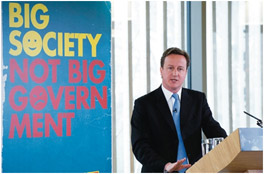 For that reason, David Cameron’s slogan enrages many people, not only on the centre and left in politics, but also on the Thatcherite right, who prefer individualist rather than communal alternatives to the state. In addition, plenty of non-political grass-roots activists dislike the term too. It appears as though a currently powerful section of one political party is trying to ‘own’ the countless manifestations of community life.2 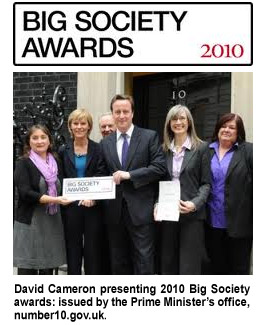 But organic expressions of civil society began long before David Cameron invoked the ‘Big Society’ to purge the Tory’s anti-society image and will continue long after the current government has disappeared.3 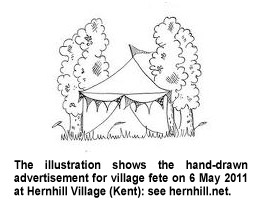 Secondly: the pre-committed research framework. Programmes should not start by ruling out all the research options. In this case, it cannot be taken for granted that ‘the’ central state is ‘the’ problem for those seeking to build communities. Governments in contemporary societies are very variegated and diverse in their roles and structures. Their impact can in some circumstances be inimical or discouraging to community activism.

Yet that proposition needs to be investigated, not just asserted. At the same time, the state can foster various forms of community developments, not least by framing a helpful legal context (for example, in support of cooperatives) or by providing grants and support systems for charitable endeavours. So favourable aspects of government also need exploration and debating.

Once political slogans begin to be taken as axiomatic, then the research rot commences. Subjects atrophy, if they are forced into pre-determined moulds. The extreme example – taking the extreme to make the case – can be seen in the fate of biological sciences in Stalin’s Russia. Elevating ‘practice’ above abstract academic theory, Trofim Lysenko (1898-1976) claimed to have pioneered a new genetics that would raise agrarian productivity dramatically, without investment in fertilisers. Stalin was delighted. [See the following photo, which shows his approving gaze at Lysenko’s 1935 Kremlin speech] Lysenko was lauded as an authentic ‘barefoot professor’, his peasant wisdom outwitting the ‘bourgeois’ academics. From 1940, Lysenko led the USSR’s Institute of Genetics. Critics were dismissed or imprisoned. Lysenkoist biology based upon environmental-manipulation rather than slow evolution was taught as a new orthodoxy.

But it didn’t work. Long before Lysenko’s teachings were officially discredited as fraudulent in 1964, they were sidelined in practice. In wartime, Stalin learned the hard way that he had to trust his generals to fight the war. Yet he did not get the message in science, or indeed in other subjects, like history, where he intervened to support one argument as Marxist orthodoxy against another as ‘bourgeois’ revisionism. Between them, Stalin and Lysenko halted Russian biological studies and palpably harmed Soviet agriculture for over a generation, greatly weakening Soviet Russia as an international power.4

Of course: this example is the extreme case. But it constitutes the classic warning. As soon as powerful politicians want one result from research and researchers are tempted to provide it, then knowledge halts.

A programme for Connecting Communities is tempting fate, not only by invoking a partisan slogan but also by promising too much. Its Vision hopes ‘To mobilise the potential for increasingly inter-connected communities’ by promoting connected research.5 Fragmented information from many sources and authorities will be united. And a sequence of benevolent Aims follow upon the generation of ‘world-leading’ research. One is the desire to ‘Create attractive, resilient, safe and sustainable environments in which communities can thrive and adapt successfully to the environmental, economic and social challenges that they will face in the twenty-first century’.6 Amen to that – but hang on a minute …

Such an aspiration does not just sound like a political manifesto, it is a political manifesto. It is not just providing research but it highlights desired research outcomes that no research council can possibly deliver. Even politicians, with their hands on the levers of power, fail to mould society to their wishes. It is certainly helpful for academic researchers to be aware of the practical applications of their work. And it would be splendid if politicians took notice of such studies.

However, communities have an organic life of their own. They can be encouraged or discouraged. But they do not depend upon politicians or upon researchers eager to please politicians.

Alas, the Connected Communities programme has fallen into a heffalump trap. It is true that successive governments would not like it if all scholars were suddenly to specialise in ‘The Economic Influences of Developments in Ship-Building Techniques 1450-1485’. (No disrespect to fifteenth-century ship-building, by the way. The example has been chosen because, as readers of Kingsley Amis will remember, it was the historic target of his anti-intellectual satire in Lucky Jim (1954).)7 Yet the remit of research in the Humanities stretches far and wide in chronology and location. It is generally researcher-led, in the interests of creativity and innovation (and including the risk of routine and dullness). Some big themes are encouraged by the research councils, which influence patterns of funding. But they take advice in choosing such themes, which usually reflect rather than create intellectual growth areas.

Talking of the vogue for Localism on the part of a repentant central government, I remember Hazel Blears, then Labour’s Secretary of State for Communities and Local Government, proudly informing a group of local community activists in Putney (2008) that: ‘It has fallen to me to regenerate Britain’s communities’. She got a collective raspberry from her audience, who daily struggled to promote citizen engagement. They were not impressed. Voters weren’t enamoured either. While politicians necessarily include some hot air in their armoury, it should be good quality rhetoric. And researchers should avoid it entirely.

1 This World Alliance for Citizen Participation is self-defined as ‘an international alliance of members and partners which constitutes an influential network of organisations at the local, national, regional and international levels, and spans the spectrum of civil society’, committed to expanding democracy and citizen participation: see www.civicus.org. The interesting website is, however, insufficiently clear about the actual leadership and membership of Civicus.

3 The illustration shows the hand-drawn advertisement for village fete on 6 May 2011 at Hernhill Village (Kent): see hernhill.net.

MONTHLY BLOG 11, WHERE IS THE POLITICAL LEFT TODAY?
Scroll to top