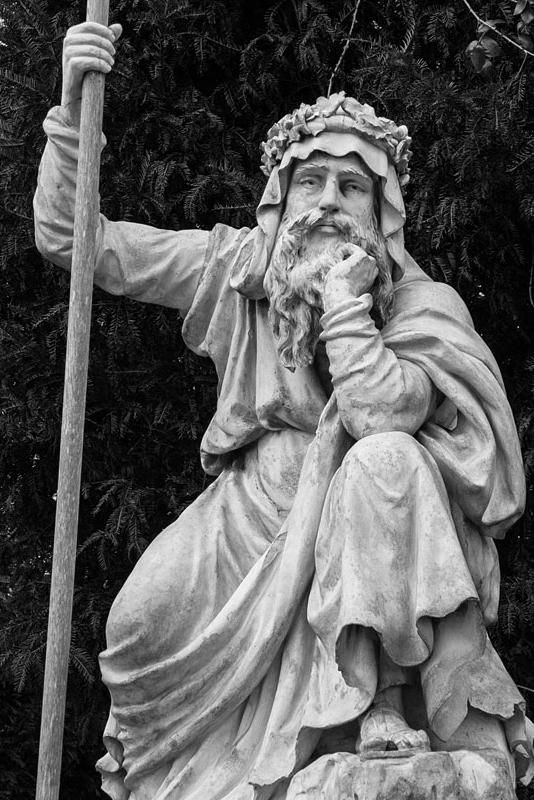 Not only did a few famous eighteenth-century recluses choose solitude (see BLOG no 114, June 2020) but others found that isolation went with the job. Two new occupations called for people with self-contained personalities, who were willing to live and work ‘far from the madding crowd’s ignoble strife’, to cite the evocative words of Thomas Gray (1751).1

Firstly, there were the light-housekeepers, employed to tend the dramatic new structures being constructed around the British coast to keep shipping safe.2 These men and the few women in the business had to be punctilious in sticking to the timetables of the job, and able to keep themselves busy with daily repairs and maintenance. Their lamps needed constant attention, to keep the lenses clean and wicks trimmed. Some keepers brought their families with them – indeed some jobs were handed on from father to son. But their work and lifestyles were unavoidably isolated.

Light-housekeepers, who were expected to keep their eyes open for shipping in distress at sea, sometimes found themselves in danger too. The world’s first sea-girt Eddystone Lighthouse (1698-1703), which was situated on perilous rocks off the Cornish coast, did not last long. Wood-built, it was destroyed in the notorious ‘great storm’ of 1703. Also killed in the cataclysm were Henry Winstanley, its architect who was checking for repairs – and three light-housekeepers. The imperative need for their warning beacon was such that three successor structures have since been built on or near the original site. A second Eddystone (1708-55) burned down in 1755, killing its 94-year-old light-housekeeper. He was looking at the blaze, open-mouthed, when he fatally swallowed a globule of hot lead, dying several days later. (The third Eddystone lasted from 1756-1877, until replaced by the current Victorian edifice, located very close to the original (1878- now).)

Notwithstanding the isolation and occasional dangers, the light-housekeepers stuck devotedly to their roles. They knew that their beaming lamps conveyed messages of hope and support for all seafarers. And the keepers formed part of a coastal watch-guard, which included customs officials and lifeboat crews.

Things were quite otherwise in the case of an entirely new eighteenth-century post for solitary workers. A few wealthy landowners with a taste for re-envisaging the simple life built hermitages in their rolling parklands. And they hoped to employ real individuals to inhabit these properties in a suitable druidic lifestyle. The ideal hermit was a man with an imposing presence, long hair, and a beard. He should have a taste for solitude but equally be willing to remain on view as a living statue.3 But suitable candidates were hard to find. The hermits generally had no tasks other than being – and no close colleagues, being neither part of the estate workforce not part of the employing household. They were intended to be truly lonely, in order to live the role.

In the mid-1740s one resident hermit was established in a specially built Heritage at the aristocrat Charles Hamilton’s lavishly landscaped Painshill Park, near Cobham, Surrey. However, the new recluse lasted three weeks in the job – before absconding. His contract was thereupon cancelled.

But, in other cases, the hermit was asked to play a particular role. At Sir Richard Hill’s Hawkstone Estate, near Market Drayton in Shropshire, visitors in 1784 could ring a special bell and gain admittance to the grotto. There sat a venerable hermit, in front of a table bearing a skull, an hour-glass, and an open book. Conversation was allowed, in which the sage would participate with graceful melancholy.

Elsewhere, however, employers expected hermits to remain silent. One landowner advertised for a recluse who was prepared to take a vow of silence for seven years – and, in the meantime, not to wash – and to let his hair and nails grow unchecked. There was, however, no rush of applicants. Before long, the fashion for employing humans as estate ornaments collapsed.

Already by the mid-eighteenth century, some landowners were experimenting with the use of model or dummy hermits. These were cheaper and much more tractable than living people. One mechanical hermit at Samuel Hellier’s estate at The Wodehouse, near Wombourne in Staffordshire, was reported in the 1770s as being moved (by a hidden servant) in a lifelike manner to delight visitors. Such contrivances showed how landowners tried to entertain the touring guests, who frequently called to view estates and the public rooms of grand houses. An ancient hermit gave an estate the patina of antiquity.

Druid statues, meanwhile, offered an equally visible but managerially easier option. They too alluded to ancient British mythologies; and signalled an intended link with the deep past.4 Thus two powerful druidic figures were installed in 1776 to flank the main entrance to the Palladian Penicuik House in Midlothian, Scotland. And in 1793 the owners of Croome Park, near Croome D’Abitot, in south Worcestershire, joined the fashion. Their finely brooding statue of a druid (shown above in 2013 photo) was carved in the new and fashionable Coade stone, which lent itself to expressive designs.5

Figures in a landscape were a means of attracting human attention. Only a few had the space and funds for large statues. But miniaturised versions began to become popular in Britain from the 1840s onwards, with the importation from Germany of specially manufactured garden gnomes.6 In 1847 Sir Charles Isham imported a batch of these terracotta figures to adorn his garden at Lamport Hall, at Lamport, Northamptonshire. Today one gnome, named Lumpy, still survives on display. He is only an indirect descendant of the eighteenth-century hermits. But the fashion for statues and gnomes shows how people continue to add human images to complement a garden design – long after the real-life human hermits disappeared. To recap: the light-housekeepers accepted their solitude, as it was embraced for a good cause, applauded by all. But a lonely life as someone else’s invented hermit did not prove at all appealing.

3 See the invaluable study by G. Campbell, The Hermit in the Garden: From Imperial Rome to Ornamental Gnome (Oxford, 2014).