Names matter. Identifying  things – people – events – in realistic terminology means that they are being fully understood and taken seriously. Conversely, it’s warping to the mind and eventually corrosive of good thought to be constantly urged to give lip-service to the ‘wrong’ terms. People who live under dictatorial systems of would-be thought-control often testify to the ‘dead’ feeling that results from public censorship, especially when it is internalised as self-censorship.

By the way, I wrote that paragraph before remembering that this sentiment dovetailed with something I’d read about Confucius. A quick Google-check confirmed my half-memory.  Confucius long ago specified that: ‘The beginning of wisdom is to call things by their proper names’. It’s a great dictum. It doesn’t claim too much. Naming is only the ‘beginning of wisdom’, not the entirety. And there is often scope for debating what is or should be the ‘proper’ name. Nonetheless, Confucius not only highlights the good effect of clear vision, accurately acknowledged to others, but equally implies the malign effects of the reverse. The beginning of madness is to delude oneself and others about the true state of affairs.

Which brings me to my current question: are University students ‘customers’? If so, an interesting implication follows. If ‘the customer is always right’, as the business world asserts but does not always uphold, should not all students get top marks for having completed an assignment or an exam paper? Or, at very least not get bad marks?

Interestingly, now that student payments for tuition are very much up-front and personal in the form of fees (which are funded as repayable loans), so the standard of degrees is gradually rising. Indeed, grade inflation has become noticeable ever since Britain’s Universities began to be expanded into a mass system. A survey undertaken in 2003 found that the third-class degree has been in steady decline since 1960 and was nearing extinction by 2000.1  And a decade on, the lower second (2.2) in some subjects is following the same trajectory. Better teaching, better study skills, and/or improved exam preparation may account for some of this development. But rising expectations on the part of students – and increasing reputational ambitions on the part of the Universities – also exert subtle pressures upon examiners to be generous.

Nonetheless, even allowing for a changing framework of inputs and outputs, a degree cannot properly be ‘bought’. Students within any given University course are learners, not customers. Their own input is an essential part of the process. They can gain a better degree not by more money but by better effort, well directed, and by better ability, suitably honed.

People learn massively from teachers, but also much from private study, and much too from their fellow-learners (who offer both positive and negative exemplars). Hence the tutors, the individual student, and other students all contribute to each individual’s result.2

A classic phrase for this integrated learning process was ‘the community of scholars’. That phrase now sounds quaint and possibly rather boring. Popularly, scholarship is assumed to be quintessentially dull and pedantic, with the added detriment of causing its devotees to ‘scorn delights and live laborious days,’ in Milton’s killing phrase.3  In fact, of course, learning isn’t dull. Milton, himself a very learned man, knew so too. Nonetheless, ‘the community of scholars’ doesn’t cut the twenty-first century terminological mustard.

But ‘learning’ has a better vibe. It commands ‘light’. People may lust for it, without losing their dignity. And it implies a continually interactive process. So it’s good for students to think of themselves as part of a community of learners. Compared with their pupils, the dons are generally older, sometimes wiser, always much better informed about the curriculum, much more experienced in teaching, and ideally seasoned by their own research efforts. But the academics too are learners, if more advanced along the pathway. They are sharing the experience and their expertise with the students. Advances in knowledge can come from any individual at any level, often emerging from debates and questions, no matter how naive. So it’s not mere pretension that causes many academics to thank in their scholarly prefaces not only their fellow researchers but also their students.

Equally, it’s good for the hard-pressed dons to think of themselves as part of an intellectual community that extends to the students. That concept reasserts an essential solidarity. It also serves to reaffirm the core commitment of the University to the inter-linked aims of teaching and research. Otherwise, the students, who are integral to the process, are seemingly in danger of getting overlooked while the dons are increasingly tugged between the rival pressures of specialist research in the age of Research Assessment, and of managerial business-speak in the age of the University-plc.4

Lastly, reference to ‘community’ need not be too starry-eyed. Ideals may not always work perfectly in practice. ‘Community’ is a warm, comforting word. It’s always assumed to be a ‘good thing’. Politicians, when seeking to commend a policy such as mental health care, refer to locating it in ‘the community’ as though that concept can resolve all the problems. (As is now well proven, it can’t). And history readily demonstrates that not all congregations of people form a genuine community. Social cohesion needs more than just a good name.

That’s why it’s good to think of Universities as containing communities of learners, in order to encourage everyone to provide the best conditions for that basic truth to flourish at its best. That’s far from an easy task in a mass higher-education system. It runs counter to attempts at viewing students as individual consumers. But it’s more realistic as to how teaching actually works well. And calling things by their proper names makes a proper start. 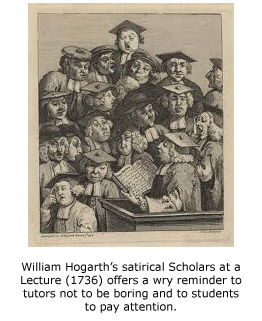 2 That’s one reason why performance-related-pay (PRP) for teachers, based upon examination results for their taught courses, remains a very blunt tool for rewarding teaching achievements. Furthermore, all calculations for PRP (to work even approximately justly) need to take account of the base-line from which the students began, to measure the educational ‘value-added’. Without that proviso, teachers (if incentivised purely by monetary reward) should logically clamour to teach only the best, brightest, and most committed students, who will deliver the ‘best’ results.

3 John Milton, Lycidas: A Lament for a Friend, Drowned in his Passage from Chester on the Irish Seas (1637), lines 70-72: ‘Fame is the spur that the clear spirit doth raise/ (That last Infirmity of Noble mind)/ To scorn delights and live laborious days.’

4 On the marketisation of higher education, see film entitled Universities Plc? Enterprise in Higher Education, made by film students at the University of Warwick (2013): www2.warwick.ac.uk/fac