Having proposed eliminating from our thoughts and vocabulary the concept of ‘race’ (and I’m not alone in making that suggestion), how do people respond?

Indifference: we are all stardust. Many people these days shrug. They say that the word ‘race’ is disappearing anyway, and what does it matter?

Indeed, a friend with children who are conventionally described as ‘mixed race’ tells me that these young people are not worried by their origins and call themselves, semi-jokingly, ‘mixed ray’. It makes them sound like elfin creatures from the sun and stars – rather endearing really. Moreover, such a claim resonates with the fact that many astro-biologists today confirm that all humans (among all organic and inorganic matter on earth) are ultimately made from trace elements from space – or, put more romantically, from stardust. 1

So from a cosmic point of view, there’s no point in worrying over minor surface differences within one species on a minor planet, circulating within the constellation of a minor sun, which itself lies in but one quite ordinary galaxy within a myriad of galaxies.

Ethnic pride: On the other hand, we do live specifically here, on earth. And we are a ‘lookist’ species. So others give more complex responses, dropping ‘race’ for some purposes but keeping it for others. Given changing social attitudes, the general terminology seems to be disappearing imperceptibly from daily vocabulary. As I mentioned before, describing people as ‘yellow’ and ‘brown’ has gone. Probably ‘white’ will follow next, especially as lots of so-called ‘whites’ have fairly dusky skins.

‘Black’, however, will probably be the slowest to go. Here there are good as well as negative reasons. Numerous people from Africa and from the world-wide African diaspora have proudly reclaimed the terminology, not in shame but in positive affirmation.

Battersea’s first ‘black’ Mayor, John Archer (Mayor 1913/14) was a pioneer in that regard. I mentioned him in my previous BLOG (no 35). Archer was a Briton, with Irish and West Indian ancestry.2  He is always described as ‘black’ and he himself embraced black consciousness-raising. Yet he always stressed his debt to his Irish mother as well as to his Barbadian father.

In 1918 Archer became the first President of the African Progress Union. In that capacity, he attended meetings of the Pan-African Congress, which promoted African decolonisation and development. The political agenda of activists who set up these bodies was purposive. And they went well beyond the imagery of negritude by using a world-regional nomenclature.

Interestingly, therefore, the Pan-African Congress was attended by men and women of many skin colours. Look at the old photograph (1921) of the delegates from Britain, continental Europe, Africa and the USA (see Illus 1). Possibly the dapper man, slightly to the L of centre in the front row, holding a portfolio, is John Archer himself. 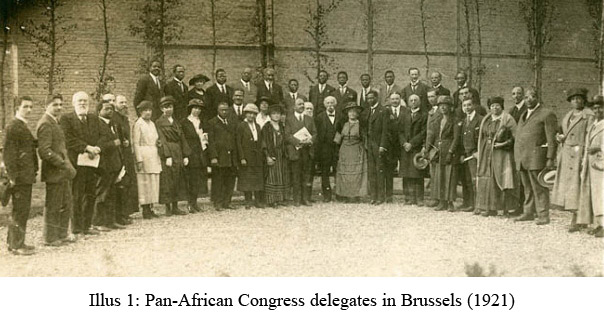 Today, ‘black pride’, which has had a good cultural run in both Britain and the USA, seems to be following, interestingly, in Archer’s footsteps. Not by ignoring differences but by celebrating them – in world-regional rather than skin-colourist terms. Such labels also have the merit of flexibility, since they can be combined to allow for multiple ancestries.

Just to repeat the obvious: skin colour is often deceptive. Genetic surveys reveal high levels of ancestral mixing. As American academic Henry Louis Gates has recently reminded us in The Observer,3  many Americans with dark skins (35% of all African American men) have European as well as African ancestry. And the same is true, on a lesser scale, in reverse. At least 5% of ‘white’ male Americans have African ancestry, according to their DNA.

Significantly, people with mixed ethnicities often complain at being forced to choose one or the other (or having choice foisted upon them), when they would prefer, like the ‘Cablinasian’ Tiger Woods, to celebrate plurality. Pride in ancestry will thus outlast and out-invent erroneous theories of separate ‘races’.

Just cognisance of genetic and historic legacies: There is a further point, however, which should not be ignored by those (like me) who generally advocate ‘children of stardust’ universalism. For some social/political reasons, as well as for other medical purposes, it is important to understand people’s backgrounds.

Thus ethnic classifications can help to check against institutionalised prejudice. And they also provide important information in terms of genetic inheritance. To take one well known example, sickle-cell anaemia (drepanocytosis) is a condition that can be inherited by humans whose ancestors lived in tropical and sub-tropical regions where malaria is or was common.4  It is obviously helpful, therefore, to establish people’s genetic backgrounds as accurately as possible.

All medical and social/political requirements for classification, however, call for just classification systems. One reader of my previous BLOG responded that it didn’t really matter, since if ‘race’ was dropped another system would be found instead. But that would constitute progress. The theory of different human races turned out to be erroneous. Instead, we should enquire about ethnic (national) identity and/or world-regional origins within one common species. Plus we should not use a hybrid mix of definitions, partly by ethnicities and partly by skin colour (as in ‘black Britons’).

Lastly, all serious systems of enquiry should ask about plurality: we have two parents, who may or may not share common backgrounds. That’s the point: men and women from any world-region can breed together successfully, since we are all one species.

4 M. Tapper, In the Blood: Sickle Cell Anaemia and the Politics of Race (Philadelphia, 1999).

MONTHLY BLOG 35, DONS AND STUDENT-CUSTOMERS? OR THE COMMUNITY OF LEARNERS?