A growing number of historians, myself included, want students to study long-term narratives as well in-depth courses.1 More on (say) the peopling of Britain since Celtic times alongside (say) life in Roman Britain or (say) medicine in Victorian times or (say) the ordinary soldier’s experiences in the trenches of World War I. We do in-depth courses very well. But long-term studies are also vital to provide frameworks.2

Put into more abstract terms, we need more diachronic (long-term) analysis, alongside synchronic (short-term) immersion. These approaches, furthermore, do not have to be diametrically opposed. Courses, like books, can do both.

That was my aim in an undergraduate programme, devised at Royal Holloway, London University.3  It studied the long and the short of one specific period. The choice fell upon early nineteenth-century British history, because it’s well documented and relatively near in time. In that way, the diachronic aftermath is not too lengthy for students to assess within a finite course of study.

Integral to the course requirements were two long essays, both on the same topic X. There were no restrictions, other than analytical feasiblity. X could be a real person; a fictional or semi-fictionalised person (like Dick Turpin);4  an event; a place; or anything that lends itself to both synchronic and diachronic analysis. Students chose their own, with advice as required. One essay of the pair then focused upon X’s reputation in his/her/its own day; the other upon X’s long-term impact/reputation in subsequent years.

There was also an examination attached to the course. One section of the paper contained traditional exam questions; the second just one compulsory question on the chosen topic X. Setting that proved a good challenge for the tutor, thinking of ways to compare and contrast short- and long-term reputations. And of course, the compulsory question could not allow a simple regurgitation of the coursework essays; and it had to be equally answerable by all candidates.

Most students decided to examine famous individuals, both worthies and unworthies: Beau Brummell; Mad Jack Mytton; Queen Caroline; Charles Dickens; Sir Robert Peel; Earl Grey; the Duke of Wellington; Harriette Wilson; Lord Byron; Mary Shelley; Ada Lovelace; Charles Darwin; Harriet Martineau; Robert Stephenson; Michael Faraday; Augustus Pugin; Elizabeth Gaskell; Thomas Arnold; Mary Seacole; to name only a few. Leading politicians and literary figures tended to be the first choices. A recent book shows what can be done in the case of the risen (and rising still further) star of Jane Austen.5 In addition, a minority preferred big events, such as the Battle of Waterloo; or the Great Exhibition. None in fact chose a place or building; but it could be done, provided the focus is kept sharp (the Palace of Westminster, not ‘London’.)

Studying contemporary reputations encouraged a focus upon newspaper reports, pamphlets, letters, public commemorations, and so forth. In general, students assumed that synchronic reputation would be comparatively easy to research. Yet they were often surprised to find that initial responses to X were confused. It takes time for reputations to become fixed. In particular, where the personage X had a long life, there might well be significant fluctuations during his or her lifetime. The radical John Thelwall, for example, was notorious in 1794, when on trial for high treason, yet largely forgotten at his death in 1834. 6

By contrast, students often began by feeling fussed and unhappy about studying X’s diachronic reputation. There were no immediate textbooks to offer guidance. Nonetheless, they often found that studying long-term changes was good fun, because more off-the-wall. The web is particularly helpful, as wikipedia often lists references to X in film(s), TV, literature, song(s) and popular culture. Of course, all wiki-leads need to be double-checked. There are plenty of errors and omissions out there.

Nonetheless, for someone wishing to study the long-term reputation of (say) Beau Brummell (1778-1840), wikipedia offers extensive leads, providing many references to Brummell in art, literature, song, film, and sundry stylistic products making use of his name, as well as a bibliography. 7 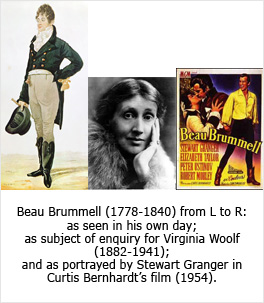 Plus it is crucial to go beyond wikipedia. For example, a search for relevant publications would reveal an unlisted offering. In 1925, Virginia Woolf, no less, published a short tract on Beau Brummell.8 The student is thus challenged to explore what the Bloomsbury intellectual found of interest in the Regency Dandy. Of course, the tutor/ examiner also has to do some basic checks, to ensure that candidates don’t miss the obvious. On the other hand, surprise finds, unanticipated by all parties, proved part of the intellectual fun.

Lastly, the exercise encourages reflections upon posthumous reputations. People in the performing arts and sports, politicians, journalists, celebrities, military men, and notorious criminals are strong candidates for contemporary fame followed by subsequent oblivion, unless rescued by some special factor. In the case of the minor horse-thief Dick Turpin, he was catapulted from conflicted memory in the eighteenth century into dashing highwayman by the novel Rookwood (1834). That fictional boost gave his romantic myth another 100 years before starting to fade again.

Conversely, a tiny minority can go from obscurity in their lifetime to later global renown. But it depends crucially upon their achievements being transmissable to successive generations. The artist and poet William Blake (1757-1827) is a rare and cherished example. Students working on the long-and-the-short of the early nineteenth century were challenged to find another contemporary with such a dramatic posthumous trajectory. They couldn’t.

But they and I enjoyed the quest and discovery of unlikely reactions, like Virginia Woolf dallying with Beau Brummell. It provided a new way of thinking about the long-term – not just in terms of grand trends (‘progress’; ‘economic stages’) but by way of cultural borrowings and transmutations between generations. When and why? There are trends but no infallible rules.

MONTHLY BLOG 37, HOW DO PEOPLE RESPOND TO ELIMINATING THE LANGUAGE OF ‘RACE’?