Is the past dead or alive? Posing such a binary question insists upon choice; but the options constitute a false dichotomy. Nonetheless, the death of the past is often proclaimed. This BLOG examines the arguments for and against; and highlights the snares of binary thinking.

Firstly, the past, dead or alive? The ‘death of the past’ is a common, possibly reassuring notion. If you have forgotten the History dates learned at school, then don’t worry, you are in good company. Most people have. In the USA there is a sad debate entitled: ‘Is History history?’ There is at least one book entitled The Death of the Past.1 In fact, that particular study laments that people forget far too much. Nonetheless, emphatic phrases circulate in popular culture. ‘Never look back. The past is dead and buried’. ‘The bad (or good) Old Days have gone’. Something or other is irrevocably past – rendering it ‘as dead as the proverbial dodo’, which was last reliably sighted in Mauritius in 1662. 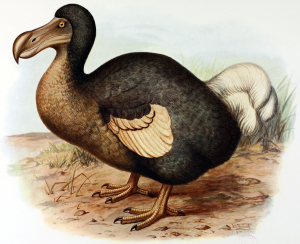 At the same time, however, there’s a rival strand of thought, which asserts that the past is very much alive. The most famous and often quoted claim to that effect comes from William Faulkner, writing in the American Deep South in 1951, where memories and resentments from Civil War times have far from disappeared. ‘The past is never dead’, he wrote. ‘It’s not even past’. 2

Another strong statement to that effect came from Karl Marx in 1851/2. He thundered at the unpastness of the past. Revolutionary activism was constantly hampered by old thinking and old ideas: ‘The tradition of all the dead generations weighs like a nightmare upon the brain of the living’.3

Opposition to old thinking was accordingly expressed by many later Communist leaders. The ‘new’ was good and revolutionary. Antiquity was the dangerous foe. Chairman Mao’s campaign against the ‘Four Olds’ – Old Customs, Old Culture, Old Habits, Old Ideas – was a striking example, at the time of his intended Cultural Revolution in 1966.4 Yet the fact that various traditional aspects of Chinese life still persist today indicates the difficulty of uprooting very deeply embedded social attitudes, even when using the resources of a totalitarian state.

For historians, meanwhile, it’s best to reject over-simplified choices. Many things in the past (both material and intangible) have died or come to an end. Yet far from everything has shared the same fate. Ideas, languages, cultures, religions persist through Time, incorporating changes alongside continuities; biological traits evolve over immensely long periods; the structure of the cosmos unfolds over many billennia (an emergent neologism) within a measurable framework.

Hence there’s nothing like a rigid divide between past and present. They are separated by no more than a nano-second between NOW and the immediate nano-second before NOW, so that legacies/contributions from the past infuse every moment as it is lived.

Secondly, thinking in terms of binary alternatives: Having to choose between bad/old/dead versus good/new/alive is a classic example of binary thought. It is an approach commonly cultivated by activists, for example in revolutionary or apocalyptic religious movements. Are you with the great cause or against it? Such attitudes can be psychologically powerful in binding groups together.

Binaries can also be useful when assessing the strength and weakness of an argument or a proposed course of action. As bimanual creatures, we can consider the pros and cons, using the formula ‘on the one hand’ … ‘on the other hand’. Indeed, when making a case, it’s always helpful to understand the arguments against your own. That way, when facing a fundamental critic, you are prepared. (Binary options also provide a good way to bully a witness on oath: Come on, answer, Yes or No! When the truthful reply might be ‘Somewhat’ or ‘Maybe’.)

It’s even been argued that some human societies are intrinsically binary in their deepest thought patterns. Russian culture is one that has been historically so identified.5 Hence binary switching may have helped to familiarise the population with the country’s dramatic twentieth-century lurches from Tsarism to Communism and, later, back to a different form of oligarchic Democracy. (Do today’s Russians agree; or perhaps, agree somewhat?)

Either way, there is no doubt that binary thought, like binary notation, has its uses. But studying History requires the capacity to grapple with complexity alongside simplicity. Is the past dead or alive? The answer is both and neither. It falls within the embrace of ever-stable ever-fluid Time, which lives and dies simultaneously.

MONTHLY BLOG 63, THE VALUE OF VOTING – AND WHY THE PRACTICE SHOULD NOT BE...
Scroll to top