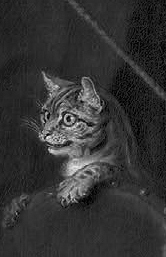 Cats in Britain changed their roles decisively in the course of the long eighteenth century.1 They switched from being rat-catchers-in-chief into much treasured domestic pets. Of course, the changeover was not absolute. There were pet cats before this period; and there were rat- and mouse-catching cats long afterwards. Nonetheless, this era was a prime time of change, as Britain launched into its new history as a world leader in terms of urbanisation, commercialisation and (later) industrialisation. Families in town houses increasingly cultivated the companionship of cats not as on-site pest controllers (though that might be an agreeable by-product) but as domestic pets.

Two quick pointers confirm the process of adaptation. One was the growing number of men who worked as professional rat-catchers, undertaking the task more systematically than did domestic cats, which tended to fall asleep after dining well. And the second was the emergence of a regular market in pet food. Vendors known as ‘cat’s-meat men’ (who actually included a few women) walked the town streets with barrows of chopped horsemeat, purchased from the knackers’ yards. Such supplies preceded the tinned catfood which took over the market from the 1920s. Owners wanted their sleek, well-fed pets constantly on hand – not hungrily prowling in garrets and basements in search of food.

In this changed domestic environment, it was not surprising that many felines, snugly ensconced indoors, provided welcome companionship to authors sitting for long hours at their sedentary profession. Much the most famous eighteenth-century cat is the black-coated Hodge, which patiently kept Dr Johnson company while he toiled over his great Dictionary of the English Language (1755). This animal was not in fact the only feline pet in the household. But he was considered to be Johnson’s favourite. (In 1997 a sympathetic statue to Hodge was erected in Gough Square, outside the London townhouse which Dr Johnson rented between 1748 and 1759. Sometimes tourists place coins on the plinth or hang ribbons on the statue, for good luck).2

Other literary figures who were known as cat lovers included the writer and art connoisseur Horace Walpole; the mystic poet Christopher Smart; the legal philosopher Jeremy Bentham, who was one of the first protagonists of animal rights; the Poet Laureate Robert Southey, whose home at Greta Hall in Keswick was full of cats; the ‘Gothic’ author Mary Shelley; and the novelist Sir Walter Scott, whose tabby named Hinse (sometimes spelt Hinx) reportedly tyrannised over his pack of dogs.

Sometimes they wrote about specific animals. So the poet and anti-slavery campaigner Percival Stockdale wrote verses to commemorate Hodge, the favourite cat of his close friend Dr Johnson. While others wrote about archetypal cats. The poet and hymnodist William Cowper used a feline example to point a moral. His poem to The Retired Cat (written 1791) told the tale of a cat which was shut by mistake into a chest of drawers and left for long hours without food. It taught the imperious puss the invaluable lesson that the world did not revolve around her. But the moral was universal, as Cowper explained: ‘Beware of too sublime a sense/ Of your own worth and consequence!’ 4

Having enjoyed all these poems, my award for the weakest of these effusions goes to one by P.B. Shelley. His epigrammatic Verses on a Cat (c.1800) stress that the causes of suffering among all living creatures are diverse: ‘You would not easily guess/ All the modes of distress/ Which torture the tenants of earth’.5 In one specific case, however, the problem was clear:

But this poor little cat
Only wanted a rat,
To stuff its own little maw

It’s unfair, however, to laugh at Shelley’s plonking verse. It was an example of his very youthful wordplay, at the age of 8 or 9; and not written for posterity. Indeed, for a neophyte poet, the sentiments were impressively mature. Anyway it was saved by Shelley’s sister and published after the poet’s early death aged thirty, when no doubt all mementoes were being treasured.

In fact, all these eighteenth-century feline verse tributes are notable in their different ways. They range from tender to comic; from well-observed to schematic. Collectively, they confirm the ubiquity of cats in the eighteenth-century domestic scene.

Standing out from the pack, two poems record particularly graceful tributes to felinity. Best known is Thomas Gray’s Ode on the Death of a Favourite Cat, Drowned in a Tub of Goldfishes (1748).6 It’s wryly witty. And it ends with the poet’s sage observation that covetousness should not be taken too far.

Not all that tempts your wandering eyes
And heedless hearts, is lawful prize,
Nor all that glisters, gold.

Most wonderfully, however, Christopher Smart’s mid-century ruminations on his cat Jeoffry evoke a real living animal. The 74-line section appears within a much longer mystic-philosophical verse outpouring, entitled Jubilate Agno [Rejoice in the Lamb of God]. The work was not published until long after the poet’s death; and these days the Jeoffry section is often extracted as a separate poem. It is too long to quote in its entirety here. But it is written by a cat-lover, who, whilst struggling with personal anguish,7 wanted to record the special charm of his companion Jeoffry: ‘For he is a mixture of gravity and waggery’.8

As cats came to reign majestically upon the domestic hearth, the feline muse was considerably enhanced. No disrespect to other indoor pets. Or to those magnificent outdoor companions: dogs9 and horses.10 But the feline mixture of caution, companionship, and curiosity makes them potent triggers to innovative thought and cultural creativity. As well as featuring in traditional folkloric tales and magical spells, cats are now commemorated in novels, poems, art, cartoons, films, songs, opera, musicals, philosophical debates and scientific concepts (hello/goodbye to Schrödinger’s cat) and, of course, proverbial sayings. It’s seriously enough to make a cat laugh …

1 For further context, see P.J. Corfield, ‘“For I will Consider my Cat Jeoffry”: Cats and Literary Creativity in Eighteenth-Century Britain’, work-in-progress for publication 2021.

10 K. Raber and T.J. Tucker, The Culture of the Horse: Status, Discipline and Identity in the Early Modern World (Basingstoke, 2005); S. Forrest, The Age of the Horse: An Equine Journey through Human History (2016).